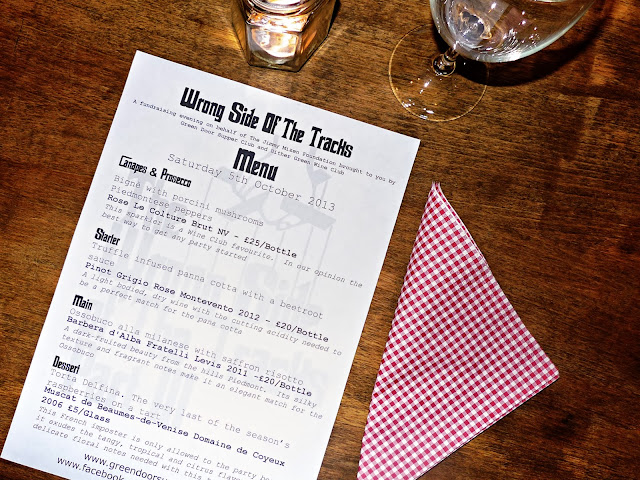 The other weekend I was accompanied by my friend and fellow Borough Belle'r to the Wrong Side of the Tracks Supperclub. I have been meaning to go to this local pop-up for some time. I am soon realising that Supper-clubs are fast becoming my favourite type of dining experience! If you've never been to Supper-club before I applaud you to go and experience it. Have a look on the Supperclub Fanpage website to find one near you.

Renata, the one creating the food, runs a blog called The Hungry Larder & also the Green Door Supper Club & Daniel runs the Hither Green Wine Club . On occasions they join forces and run ‘The Wrong Side Of The Tracks’ supperclub from the Café’ of Good Hope, Hither Green. 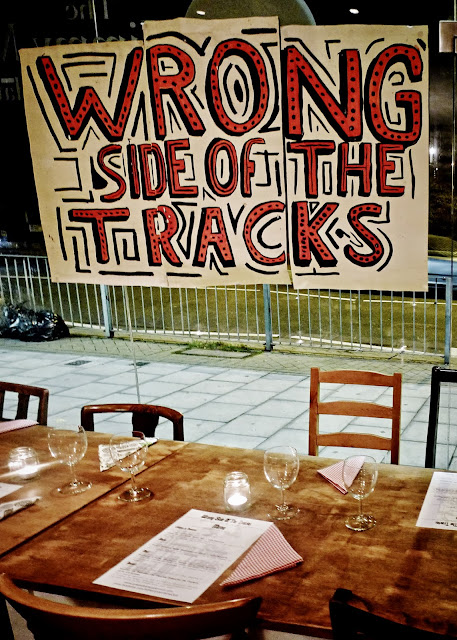 I was informed it was called The Wrong Side of The Tracks, hoping to rid North Londoners of the outdated notion that we don’t have fun south of the river!

However the name also brings up the discussion about how Hither Green is split in the middle by train tracks, would they be suggesting that this side of Hither Green is in fact the wrong side of the tracks....? To answer this personally I believe not, as both sides of HG have a strong community plus groups that go out and plant in the area. They also both have great little cafe serving great coffee and sandwiches, Cafe of Good Hope and You Don’t bring Me Flowers... Mind you the other side does have the pub.. hmm so on that basis maybe it is?! ;P

Renata served up a Northern Italian inspired spread and Daniel poured out the wine. 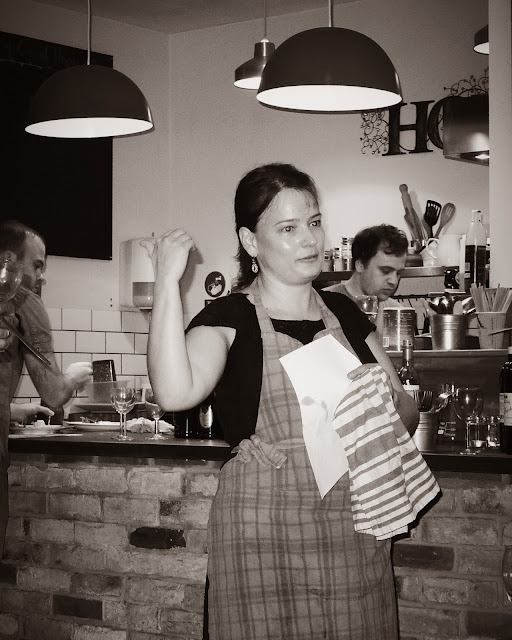 The supperclub on this occasion was not BYO, the wine was supplied by Daniel, the profit from which was used to raise funds for the Jimmy Mizen Foundation. So each glass of good wine we drank helped the wonderful work the Mizen brothers & family do for the community. Daniel was very helpful in making sure our table did our bit for the community. Thank you Daniel! 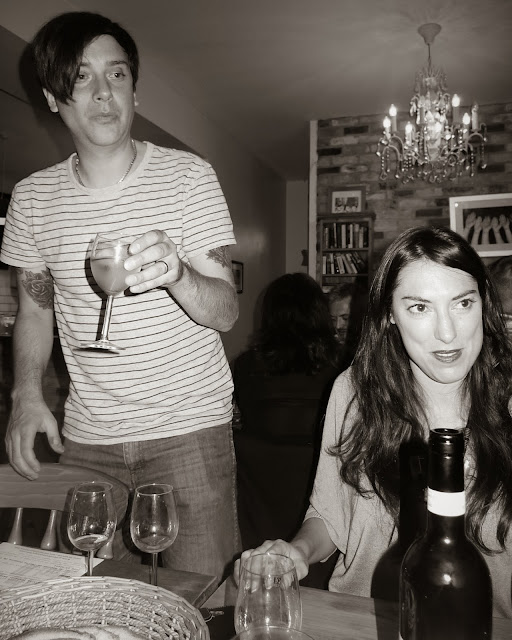 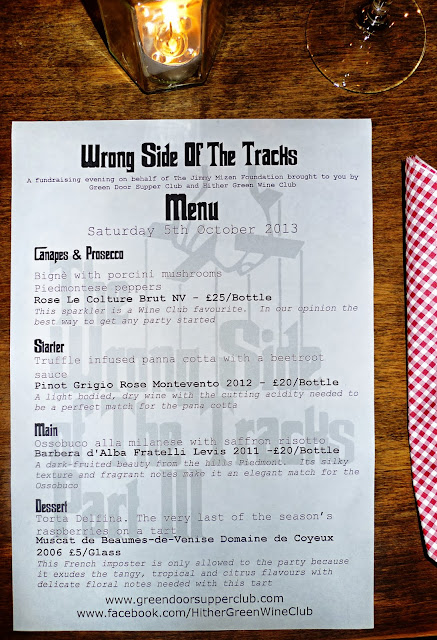 The Fizz and Pre-dinner Nibbles

On arrival the team seemed to be still completing the finishing touches, but still welcomed us into the caos with big smiles and handed us our glasses of ‘pink fizz’ which was delicious! So far, impressed.

Once in, it seemed that others may have been hovering outside and soon the doorway was packed with people coming in from the cold. Coats off and with drinks in hand, people started to chat and introduce themselves as the canapés were taken round.

There were two varieties, the first was sourdough bread with yellow pepper and anchovy paste, Piedmontese peppers. At first glance, I thought it was a scallop, but after being corrected realised the bubbles had already gone to my head. The pepper and anchovy were ok, not my cup of tea. I found the texture and size of the bread seemed to over take the flavours of the pepper and anchovy. 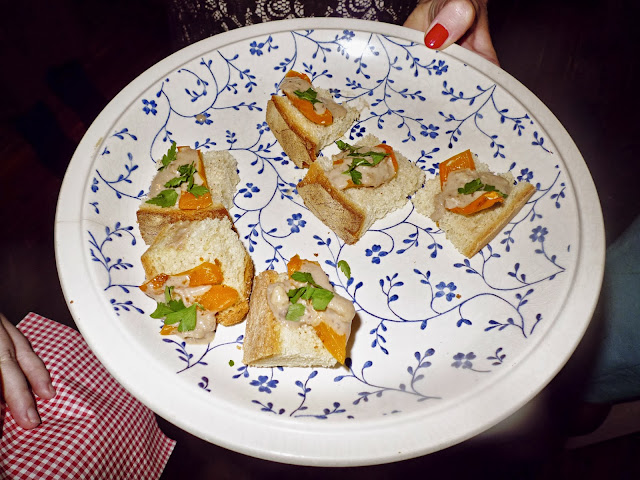 After another top up of bubbles, the second canapé was brought out. Mini mushroom pastry puff balls, Bigné with Porcini mushrooms. WOW! These were delicious and couldn’t get enough of them. I loved the light textures of the pastry and creamy kick of mushroom flavour. Yum! Big thumbs up!! 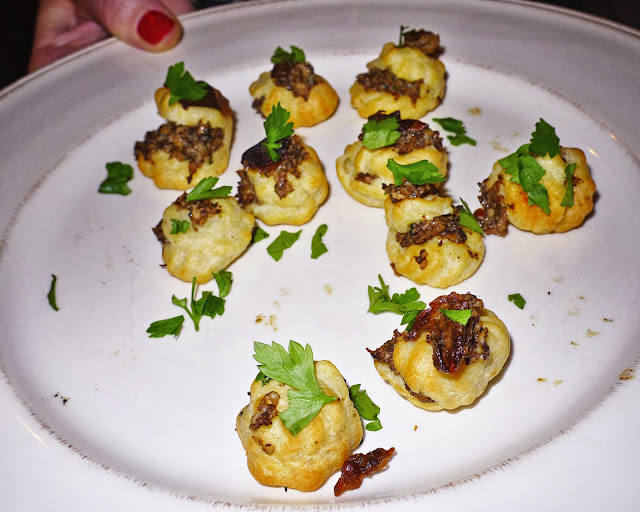 It was time to sit down for the meal which the evening price also included a glass of wine from the selection on offer from Hither Green’s Wine Club. The table went for red and I followed suit. Another fine wine!

For starter it was a savoury panna cotta. Now I love panna cotta and have had quite a few in my time but never a savoury version, so I was incredibly intrigued!

The Truffle infused panna cotta with beetroot sauce was brought over on mismatched plates and a large basket of superb sour dough bread. As a massive beetroot lover, I loved the mix of flavours. This starter was fantastic! The panna cotta was beautifully creamy and had a lovely delicate flavour that was cut by the burst of beetroot on the side. 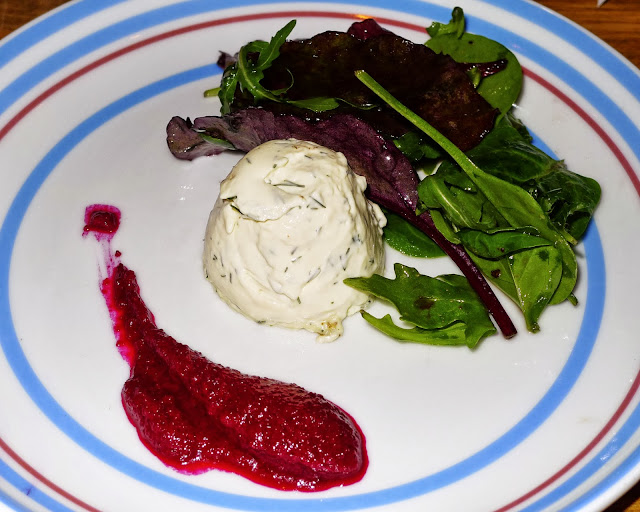 Next was the main course, again another new experience for me. I have never had Ox tail, let alone marrow bone! To tell the truth I had to look up what Ossobuco was before going as I had no idea what it was. Here is what I found out:

Ossobuco is a Milanese specialty of cross-cut veal shanks braised with vegetables, white wine and broth.
Translates as \'bone\'s hole\' is simply an inch & a half slab of veal shank. There is a good amount of tough meat surrounding a large flat piece of bone with ample amount of rich marrow in the center. When cooked the marrow melts into the sauce leaving an open whole in the center, thus the name osso buco.
It is often garnished with gremolata and traditionally served with risotto alla milanese.

You learn something new every day! 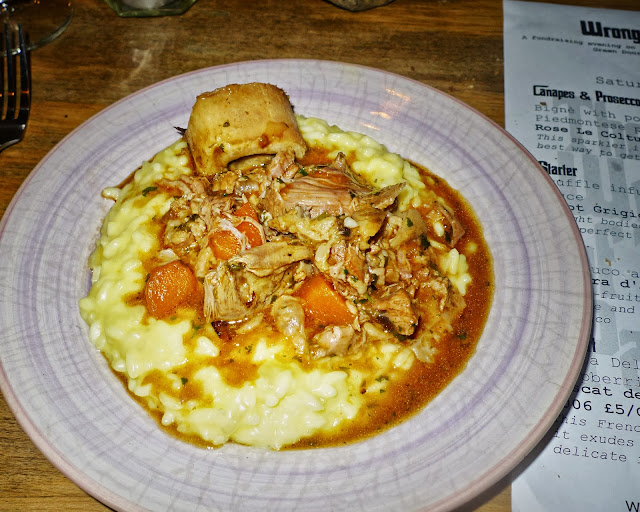 Renata made the Ossobuco, courtesy of GG Sparkes butchers, and served it on a bed of perfectly cooked creamy saffron risotto. 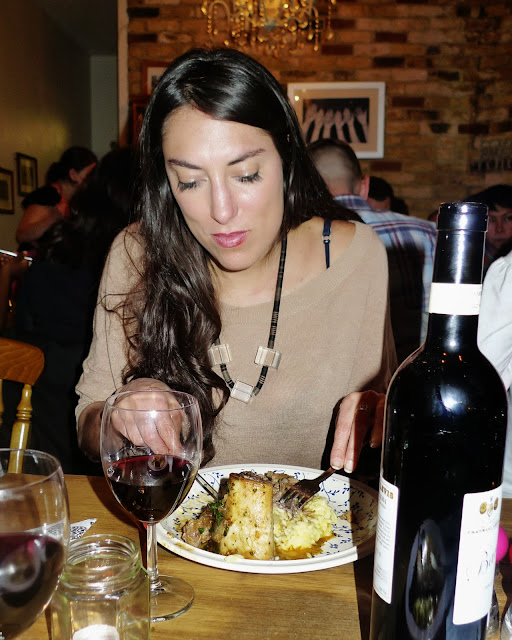 Seeing people attack the bones with their knives trying to get at marrow was quite amusing but the results of clean plates surrounding me must have been a sign to Renata at how it was a hit! 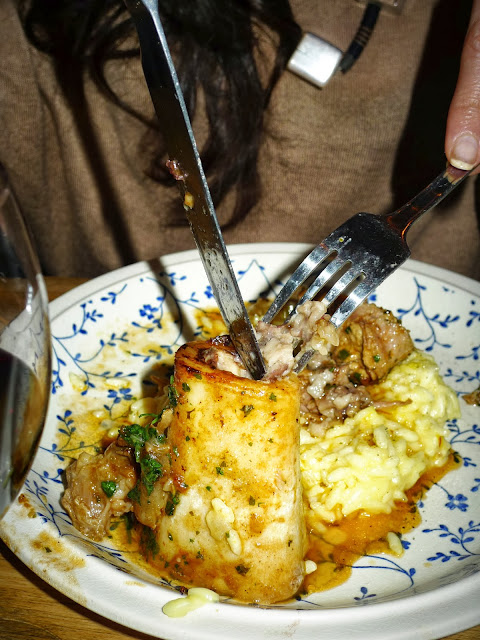 One of the reasons I love pop-up supper clubs is the people you meet. Our table was great :) it had a good mix of healthy debate, hearty laughter and mic taking, which seemed to get louder the more we drank! Amazing how easy it is to bond with complete strangers after two drinks! ;D

Torta Delfina - A traditional Tuscan dessert the combination of rich almond pastry with the last of the season’s soft raspberries. The raspberry almond tart’s base was rich and dense but had the added lift and sharpness from the raspberries. 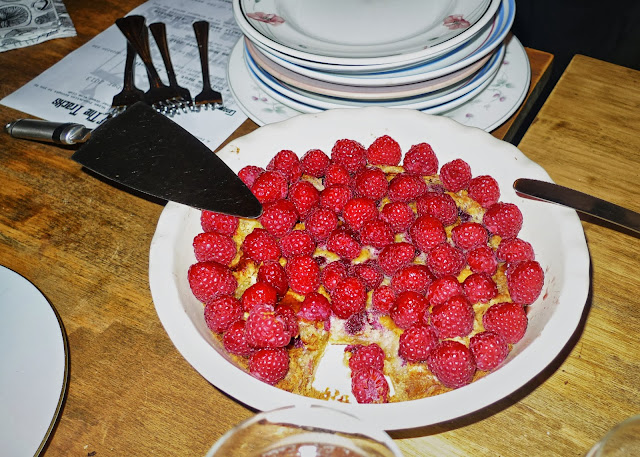 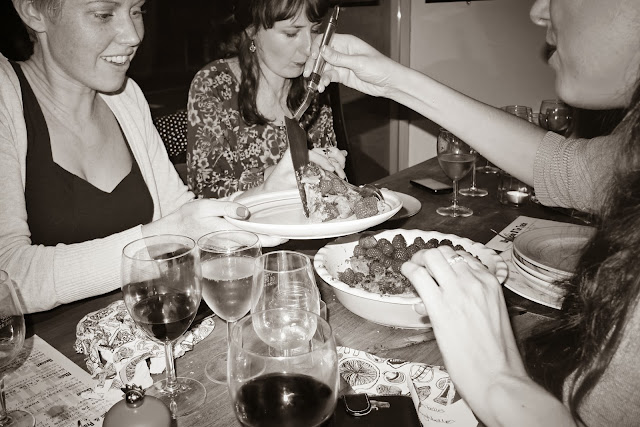 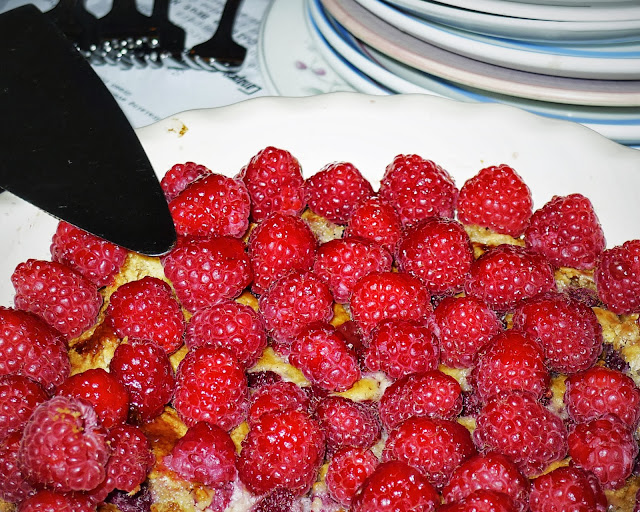 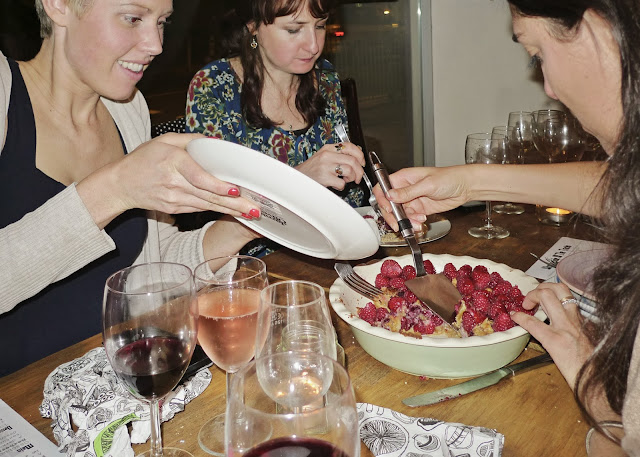 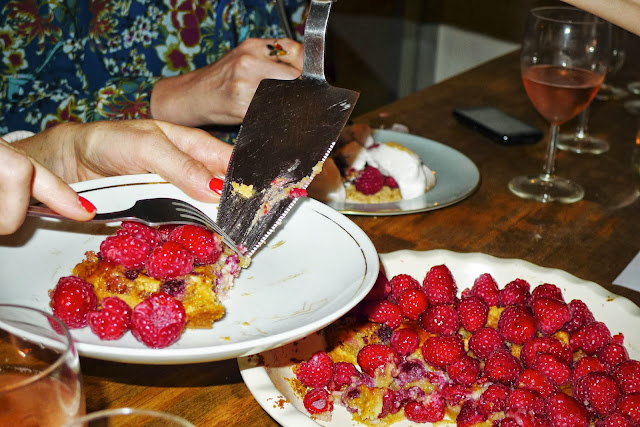 No photos, I’m afraid. Not only by this point was I a bit wobbly but also I had no idea these divine little morsels were going to be handed out. By the time I had devoured it, I’d realised i hadn’t taken a photo, so you’ll just have to trust me that they were beautifully gooey and rich. Perfect with a strong cup of coffee! 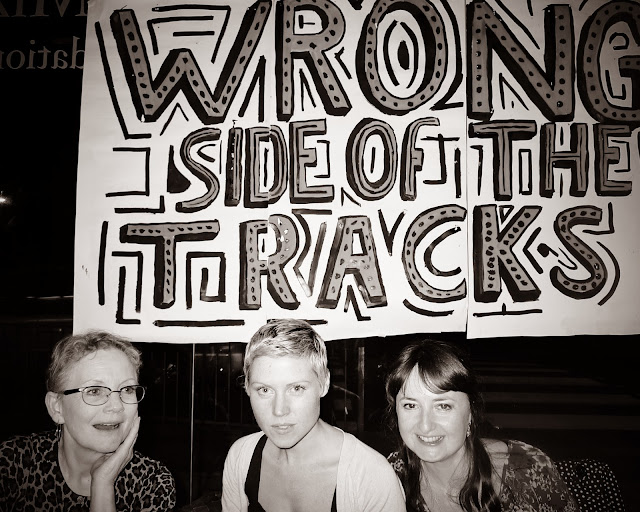 The only thing that remains to be said is thank you. Thank you Renata for all your hard work and brilliant cooking and Daniel for ensuring that we managed to raise £670 for the Jimmy Mizen Foundation. 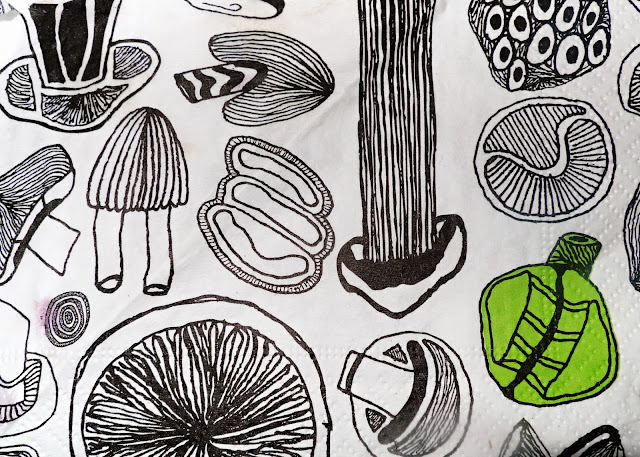